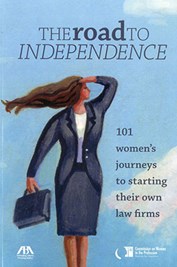 Charna’s nationally recognized support of women in law and gender equality earned her a place in an important work published by the American Bar Association, The Road to Independence: 101 Women's Journeys to Starting Their Own Law Firms.

In The Road to Independence, Charna Sherman provides earnest advice to any woman in “the certain-to-be-anguished throes” of whether to leave BigLaw. Charna writes that, “I am genuinely buoyed every day by believing, deeply, that my new independence — along with a growing tide of others' — is really part of something bigger… of a turning point in our profession — finally — for fabulously talented women to compete seriously and successfully in the upper most echelons of the law.” She offers valuable insights about her passion for the law, her relentless resolution of clients' legal matters and her fervent efforts to advance women in the legal profession. (Read the full letter.)

In this first-ever publication, The Road to Independence: 101 Women's Journeys to Starting Their Own Law Firm, the ABA turned to 101 women among the nation’s most successful lawyers to recount their experiences and insights in creating law firms of their own, either as a solo practitioner or with others, over multiple decades. The book was published in July 2011 by the ABA’s select Commission on Women in the Profession, and has received much acclaim.

The publication discusses why an increasing number of women are opting to create their own law firms and shares practical advice and lessons learned. Focusing on the experiences, challenges and opportunities of women-owned law firms, the letters not only reflect the writers’ entrepreneurial spirits and passions for the practice of law, but detail the extraordinary benefits their clients have derived from their courageous decisions to pursue different models for practicing law.

In addition to offering business-savvy guidance for starting and growing a successful law practice, The Road to Independence depicts the profession’s growth, society’s evolution and the economy’s fortunes over multiple decades of women’s advancement in the law.

With 10 years now under her belt, Charna could not be more convinced that new models for practicing law are not only the future for women, but the profession.